The following cities are currently confirmed for this event. To join our campaign, please contact the lead organizer for each city as provided below.

The campaign of Zanjani citizens to save Lake Urmia

The campaign of Zanjani citizens to save Lake Urmia:

Struggle for our survival 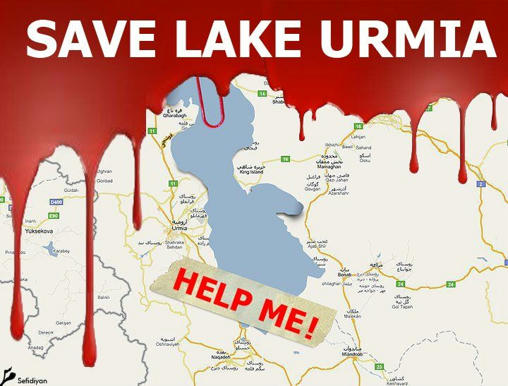 Lake Urmia, “the largest lake in the Middle East”, “the second largest salt lake on earth”, “the biggest natural habitat of Artemia in the world”, and “the largest permanent pond in western Asia” with a surface area of approximately 5200 km2 is dying and needs immediate action to survive.

Meanwhile, this environmental crisis is turning into a threat to humanity. Water level has dropped by 6 meters; 60 percent of the lake climate has turned into a salt lake; salt levels has exceeded the natural concentration of 200-240 g/L, reaching 340-360 g/L; 250,000 acres of its surroundings has turned into wasteland; the Artemia Urmiana, the only aquatic of the lake and one of the seven Artemia species in the world, is threatened by extinction; Pelicans and flamingos which indigenously hatch on the islets of the lake are vanishing; fallow deer, ram and ewe indigenous to islets of the lake are in danger of extinction; the lake’s potentials and its islands’ native vegetation are disappearing … and add to these the human consequences of the lake’s drying up: a danger posed by the precipitation and spread of 10 billion tons of salt into the air and over agricultural and residential areas will be ahead of  neighboring provinces, including Zanjan, and will bring bout great social, economic and cultural anomalies such as unemployment, immigration and displacement of millions of people.

Lake Urmia has 102 islands which are stopover points in the migrations of various kinds of wild bird life. Hundreds of thousand acres of its surface area have decreased over the past decade and turned into wasteland. According to experts and the prediction of the Environment Administration, the lake would be vanished within 5 years, putting the lives of over 14 million people in a substantial danger. The threat is already quite noticeable. In a broader context, repercussions of this catastrophe will affect the ecosystem of neighboring countries, which might face crises such as drought, air pollution and degradation of farming lands.

Environmental crisis of Lake Urmia results from a number of natural (continuous drought) and manmade factors including: construction of Sh. Kalantari causeway (resulting in impairment of water cycle from north through south), construction of numerous dams and uncontrolled well drilling and draining underground water resources (14 permanent and 7 seasonal rivers as well as 39 torrents supply the lake. According to reports, about 35 dams have been built and another 10 are being built over these rivers, holding back water and constituting a major factor in the lake’s water level decline). Civil constructions in Urmia pond, which contradicts the commitment to promotion of rational utilization of ponds (according to rational utilization measure, haman activities should not impair the ecological function of the pond).

By virtue of principle 21 of Stockholm declaration, states are responsible for preserving their environment at the first place, while the member of House of Representatives (Majlis) committee on Environment states “no budget has been allocated to plans for saving Lake Urmia” (Fars News Agency- August 27 2011).

It may be true that, for any reason, no serious action has been taken to save lake Urmia. But the fact is environment preservation principles originate from human conscience. Environment belongs to all nations and must appropriately be handed over to posterities.

Whether human actions have been carefully and thoughtfully planned is another issue. Whatever the causes of the lakes drying, they have no part in aftermath of its death. Experts, however, should do their best to identify the causes, but what is crucial now is taking measured, immediate and practical actions to save the lake. Saving the lake means saving the region’s ecosystem and lives of over 14 million people!

Hereby we declare that we love our environment, our Lake, our farmlands, our people and ourselves, and will struggle to save them. This is how a people who see its life on the verge of devastation think. Devastation of farmlands, salt rain, environmental degradation, displacement of people … all are simple results of the death of a lake. Lake Urmia is going to turn from the greatest salt lake of the Middle East into a salt desert.

No political or cultural orientation and geographical border should hamper the attempts to save Lake Urmia. Wakeful human consciences are invited to support the people of region, particularly Zanjanis who strive for their lives. The authorities, including constitutional, executive and judiciary branches should understand the delicacy of the situation and take serious, immediate and practical actions in this regard. The international organizations for environmental protection and preservation, UNESCO, UNEP and human rights institutions could play a significant role in support of the people of the region. Every effort in this regard from across the world would be welcomed. Don’t let the people of this region end up in displacement, famine, unemployment and other complications. Let us not allow the safe fate for Lake Urmia as the “Aral”. Hand in hand, let’s try to save lake Urmia.

Climate of the Lake Urmia region is semi-arid, pluviseasonal-continental Irano-Turanian steppe climate with mean annual precipitation of 341mm and mean annual temperature of 11.2 °C. Mean maximum and minimum temperatures occur in July (23.9°C) and January (−2.5°C), respectively.  The wet season lasts for 7 months with two pronounced peaks in precipitation during November–December as snowfall and March–May as